This past Wednesday in the early morn I found somewhat of a nirvana. I was out free diving at tunnel rock with twenty or so of my classmates, a few interns, some scientists, and the fish man himself Chris Maxey. For those of you who have never been to tunnel rock it is a huge coral head about a hundred yards off the coast. And its name comes from the huge L shaped swim through that runs through the entirety of the reef. It is an amazing experience fighting your mind against time so you can stay underwater for another twenty seconds. I personally find it exhilarating.

This particular dive however was almost life altering. I decided I was going to go through the swim through for the first time. So I dove down, everyone was watching and I went down and down until I reached the opening and found my way through it.  I reached the other side and was reemerged into the expansive ocean all around me. When my eyes adjusted to the light I could not believe my eyes there was a over a hundred year old ginormous loggerhead turtle waiting for me at the mouth of the tunnel as if it had chosen me for some greater purpose. I was already under water for about a minute but the second I laid eyes on my new friend oxygen was no longer a necessity. It swam all the way up to me and almost smiled. Something inside me changed inside at that moment I think I realized how much of an impact this world can have on you and amazing it really is; you just have to try. 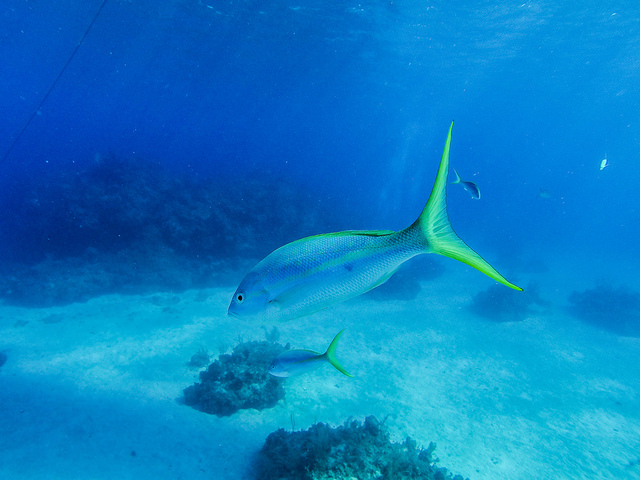 Of all the experiences I have been fortunate enough to have here, free-diving has definitely been one of the most satisfactory so far. It has been an area where I have achieved vast improvement since my start, as well as let me see so much more of the Bahamian waters and marine wildlife.

Every Wednesday and Sunday morning, if possible, I get up early to go free-diving instead of sleeping. On Wednesday that means waking up at six twenty rather than seven fifty. If it was not worth it, I would never forsake that much sleep, but it is. One of the benefits of free-diving is that many animals, such as sharks, do not like the noise that SCUBA equipment makes underwater. But in free-diving, you have no equipment, so some animals might not be as repelled as they would have if you were SCUBA diving. Whether because of this, or just out of sheer luck, I have been able to see as well swim with many amazing underwater creatures. Some of the more extraordinary examples include: a ten-foot Hammerhead Shark, an eight-foot wide Spotted Eagle Ray, a Hawksbill Sea Turtle, a Reef Shark, and much more. These amazing creatures have sparked a love of not just free-diving, but also marine life and the ocean that was not nearly as strong as before coming to the Island School.

Secondly, since my beginning of free-diving, I have been able to quickly notice my improvement. When I started, we were going out to Tunnel Rock Reef, where the water was about 35 feet deep. The first time I couldn’t even get to the bottom, then the next time I reached the bottom. After that I reached the bottom many times and was able to “chill” at the bottom for a time. Finally, after that I was able to do a swim through. While we were going to Tunnel Rock, we also went to Cathedral Reef every now and then. Cathedral is about 55 feet deep, much deeper and harder than Tunnel Rock, with an extremely long swim through. After working at it for a while, I can now reach the bottom and wait at Cathedral as well as Tunnel Rock. This large increase in my free-diving abilities has come through help of the instructors as well as pushing my limits. It feels great to be able to see yourself grow, and this theme is present in many parts of the Island School, but for me it is greatest in Free-Diving.

I am extremely grateful to have this experience, and it has been made even better with all of the work and fun of Free-Diving.

Every Wednesday and Sunday students have the opportunity to rise early and go for a morning free dive. Student Nat Davenport took some time this week to reflect on what free diving means to him.

My experience at The Island School has been an onslaught of new activities and things to do.  That being said, one constant in my life here has been free diving. Ever since that first Wednesday morning I have been to every single one since then. I have found that it really relaxes me and clears my mind of everything except the task at hand. I have had a lot of fun seeing myself progress over the course of the semester and can’t wait to see where I end up.

It still looks like night outside, but a few pull themselves out of bed to go free-diving, careful not to wake the others who opt to sleep in. W e gather our masks, snorkels, and fins, and head to the boathouse, where Chris Maxey is already leading breathing exercises. 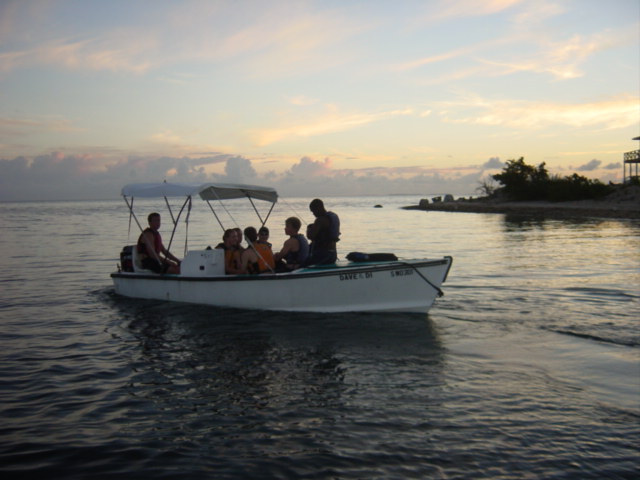 From there we take two boats out to a place called tunnel rock. One of the faculty, Mike, instructs me on how to drive the boat around the shallow rocks and sandbars that stretch out across the ocean. We get to tunnel rock and tie the boat to a buoy. I look down to see the huge rock formation covered in beautiful coral heads, with a long, partially covered tunnel leading through it that the dive sit is named after. Most of the rock is only ten or fifteen feet deep, and the sandy bottom surrounding it goes down to thirty. 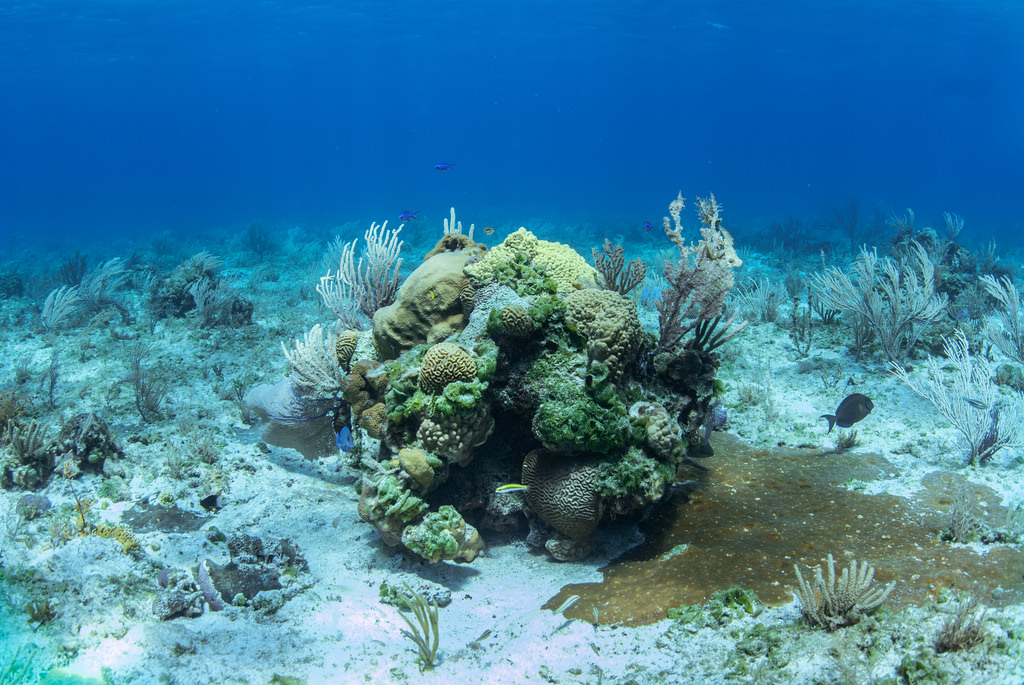 Some dive to look at the corals and fish, others choose to push their boundaries, trying to touch the bottom or see how long they can stay under. As the sun rises over the open ocean, the twenty of us begin our dives. 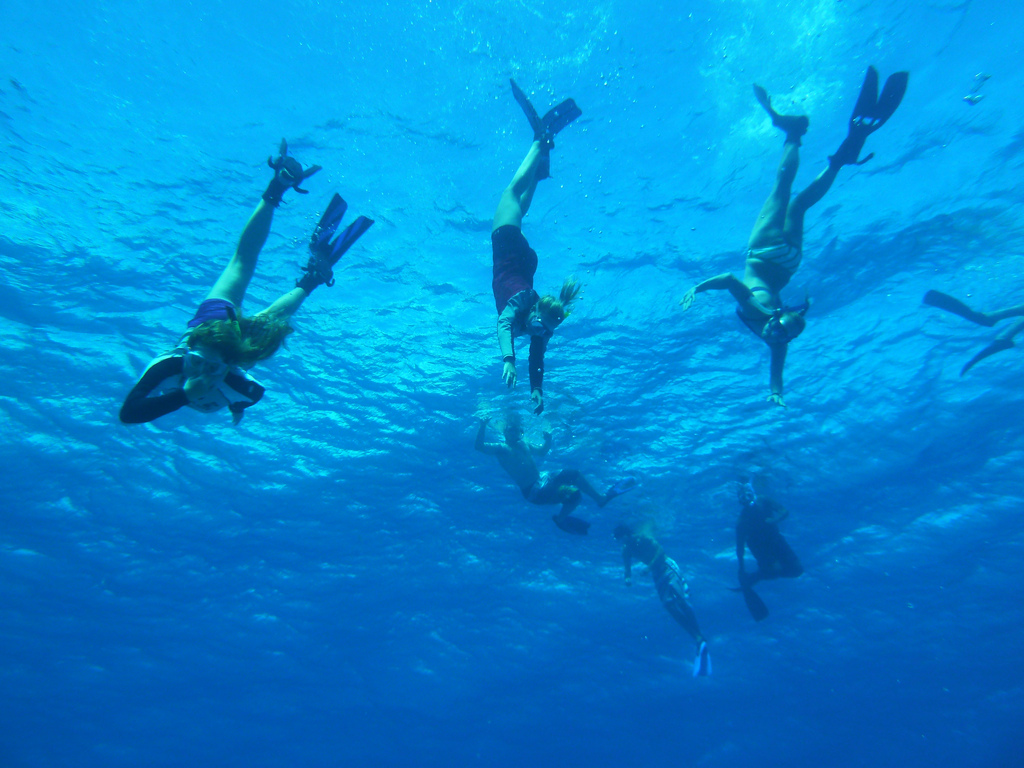 I am warming up, doing a shallow fifteen foot dive, when I see someone far below me on the sandy bottom, taking off his fins. He proceeds to grab a rock and take a couple steps. He drops the rock and swims to the surface. On my next dive I see a lionfish, and I swim over to it in order to get a better look, keeping my distance, and when I look down I see someone slowly and calmly passing through the tunnel. He reaches the end and ascends calmly. 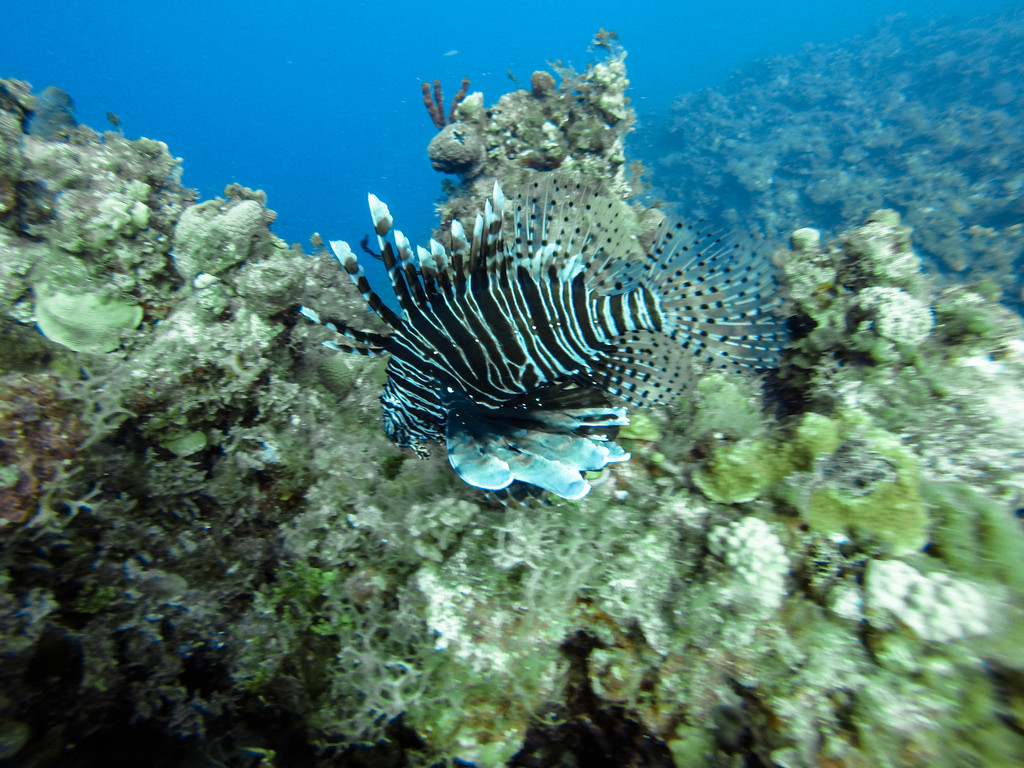 I find as the dive progresses that I can go further and further down, just by merit of practicing pushing my limits. I can stay down longer and longer, allowing me to stay more relaxed in the water, and to see more. I can’t get down very far, but that boundary is constantly being pushed, and my ability is constantly expanding. 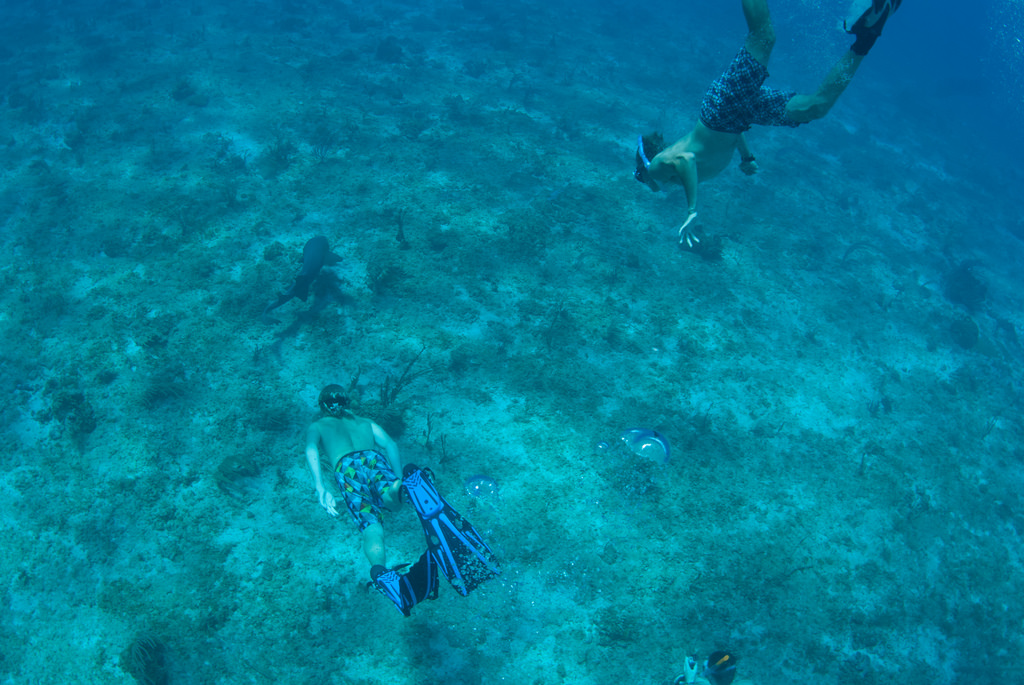 It’s like my whole experience at the Island School, really. I suffered on my first dive, barely making it ten feet down, splashing awkwardly, breathing in water, and flailing my arms the whole way, but I was thrilled and addicted. I’m still awkward, I still can’t stay down for very long, but the more that I immerse myself into the idea of getting deeper and deeper, the further I go. 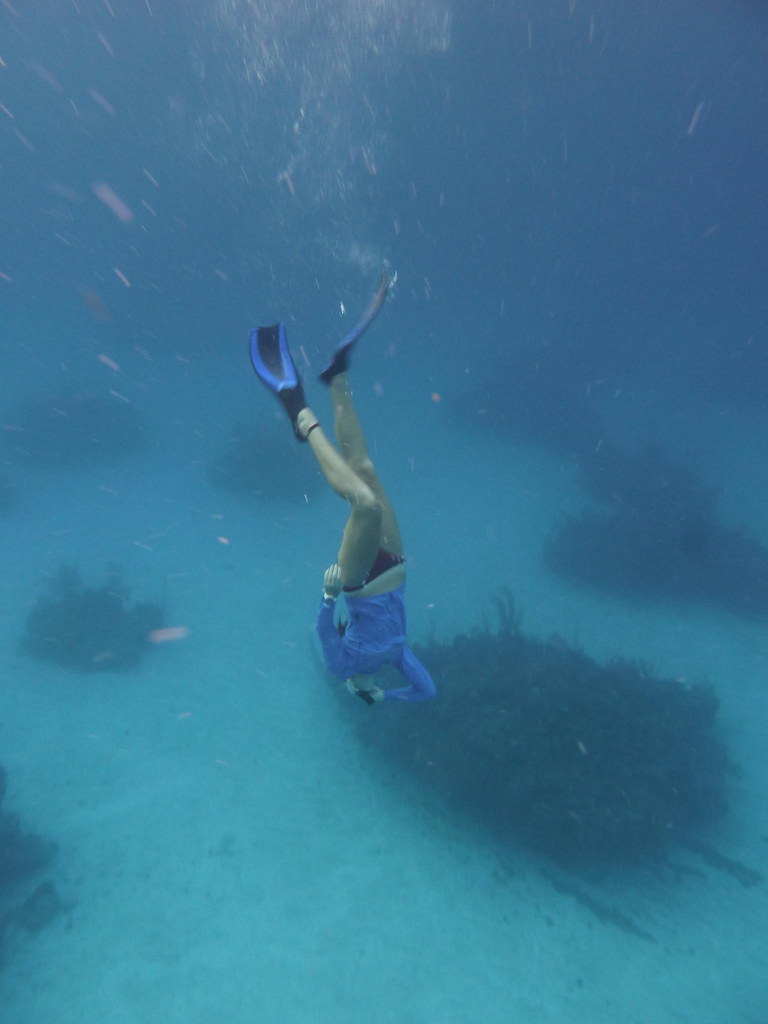 Now , I can get down to forty feet, and I’m practicing for a swim- through of tunnel rock, and it hurts every time. At the Island School, the thing that I have learned every single day, over and over again, is how to push myself, and how to completely invest my body and my mind into what I’m doing. The focus and the struggle inherent in a free-dive is the perfect microcosm of the Island School experience. 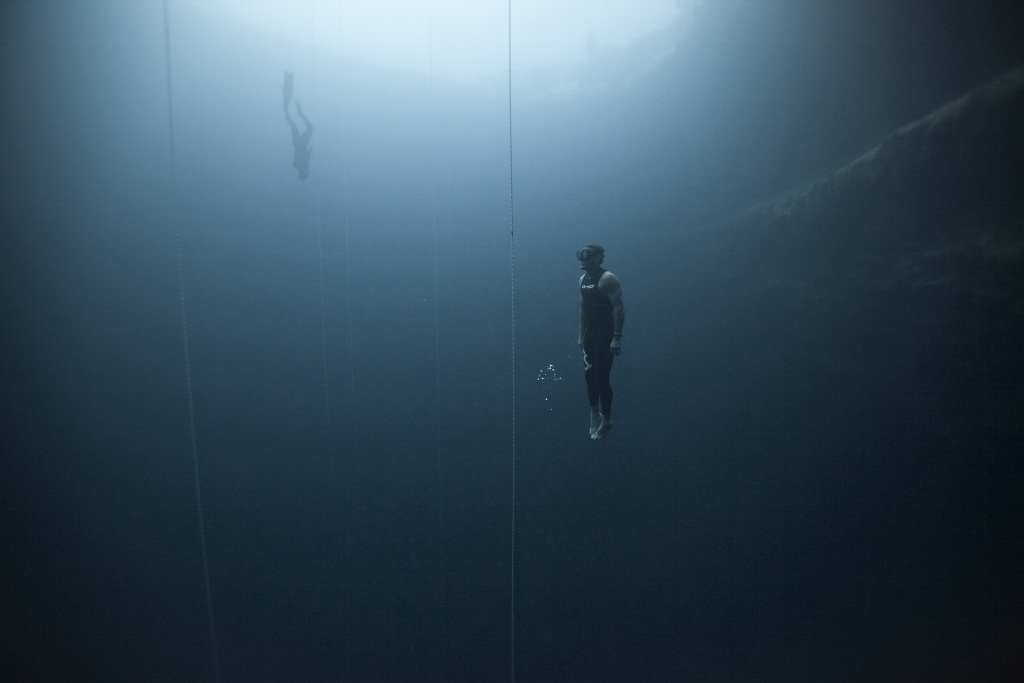 Chris Maxey had the opportunity to join a freediving course at Dean’s Blue Hole on Long Island, The Bahamas taught by the world record holder William Trubridge. The Island School is excited to have William and Brittany Trubridge return later this year to help advance our freediving curriculum at Cape Eluethera. We hope to work with the Trubridges to possibly open a course in December 2013–stay tuned!

The Island School was honored to welcome William and Brittany Trubridge to Cape Eleuthera. William is the current world record holder for unassisted freedive to 100 meters or 328 feet. He and his wife Brittany, who is an accomplished yoga instructor, spent three days sharing their skill and passion with our larger community. Students and faculty were able to receive instruction in how to maximize their breathing and flexibility and participate on several freediving expeditions to nearby reefs. In the evening William gave a presentation with some background on his journey to become the best in the world.

The audience watched with amazement as he shared a video of his record dive, on a single breath using only his hands and feet (no fins) he went down into Dean’s Blue Hole. The deepest of all the subterranean caverns across the Bahama Banks, Dean’s Blue Hole is located on Long Island in the Southern Bahamas, 200 miles south of Eleuthera. His dive took a total of four minutes and eight seconds and the audience erupted in applause as he successfully showed the judges the tab that he carried back up from the darkness. END_OF_DOCUMENT_TOKEN_TO_BE_REPLACED

I wrote this when we got back from an early morning free-dive last Wednesday. A rare pleasure.

“This morning I dived with a loggerhead. The turtle was missing a chunk of its shell. On its right hand side a shark, I assume, had taken a bite out of its shell and left its flipper intact but withered. We had been diving at Tunnel. I had taken three dives and was concentrating on relaxing under water, minimizing effort without concern for depth, and finding the point at which my buoyancy would become neutral and I would hover in the water column while excerting no effort. I had not yet found that depth. My buddy END_OF_DOCUMENT_TOKEN_TO_BE_REPLACED