Chris Maxey and Cape Eleuthera Foundation Chairman, Ernie Parizeau, traveled to Hanover, New Hampshire and Middlebury, Vermont earlier this week. Alumni and families gathered to share stories and reminisce about their time on Eleuthera. The events were filled with pizza, laughter, and memories of the cape. Chris and Ernie are now headed to Boston for a board meeting and an Admissions Reception this weekend!

5 years ago, we set out with an eye on July 1, 2016. We dreamed big. You believed in us. The Sharing Solutions fundraising campaign was launched with a Big, Audacious Goal and a belief that a small dedicated group of people can change the world. You did it!

What did you accomplish in the last 5 years? Since July 2011 Island School turned 15 years old, graduated its 1,500th leader, and Deep Creek Middle School graduated its 150th. You helped us finish building our science research campus and Cape Eleuthera Institute turned 10 years old. We’ve hosted thousands of students on short courses and internships – some of whom kept coming back up to 10 different times! You helped us save for a rainy day. You made sure that a third of families in each semester had the financial aid support to make their experience possible. You helped us start an Early Learning Center on campus and our engineering and communications teachers got a home and space to do their work. You helped us upgrade our boat and van fleet. You more than tripled our endowment to $6 million. You helped us invest in people and businesses here in South Eleuthera, and launch teachers and staff off into new careers. You met the overall goal of $15 million to make all of this possible – and surpassed it by over 30% through commitments in place for the next 5 years. Many of you through Sharing Solutions have invested and pledged to secure 10 full years of financial aid, professional development, and great educational experiences – over more than half of the life of our young endeavor.

Each gift helped – over 5,000 different times you made a choice in the last 5 years to make sure we thrive and grow and achieve all that you believed we could do.

Your legacy is profound. We are honored and tremendously grateful. Please come see what you’ve done – and help us celebrate in the coming year!
https://vimeo.com/162191538

From Chris and Pam and the extended Island School family,
Thank you!

Our board of directors leadership team gathered on Eleuthera this weekend to see the programs in action, and honor the contributions of faculty, board members, and alumni. Thank you to all of the directors who help us stay on track and growing – our shared success and future rests with you! Congratulations to all of the award recipients – we are honored to display your names in Hallig House. 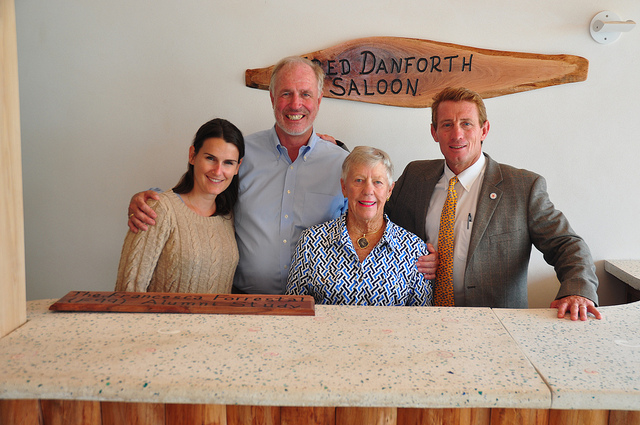 The Island School lost a great friend and mentor when Fred Danforth died last week after a valiant battle with cancer.  Fred’s son Trygg Larsson-Danforth is an Island School graduate of the Fall 2003 semester and Fred’s wife Carlene Larsson served on the Cape Eleuthera Foundation board.  Fred and Carlene have been loyal supporters of The Island School since the early years. Fred’s life work celebrates the mission of The Island School, Leadership Effecting Change.

Fred C. Danforth, co-founder of Ecosystem Investment Partners, the largest private equity firm in the United States devoted to land and stream restoration, died at his home in Mattapoisett, MA on Thursday after a long fight with gall bladder cancer.

An avid fly fisherman, Fred’s passion for environmental restoration began in 2002 when he purchased the Potts Ranch in Montana’s Blackfoot Valley. The ranch contained a severely degraded spring creek that was delivering overheated and nutrient-loaded water to the Blackfoot River. After two years of restoration efforts, trout began to return in prolific numbers, seeking out the cold, clean waters of the restored spring creek. For Fred, gaining the trust and approval of all the project’s stakeholders was as critical to the success of the project as the restoration itself. Realizing that environmental restoration could create economic value, Fred created the Upper Clark Fork Mitigation Bank, the first wetland and stream mitigation bank in Montana. Based on this experience, Fred co-founded Ecosystem Investment Partners in 2006. EIP pioneered a new “ecological asset class” by developing wetland and stream restoration projects in the United States that deliver market returns for investors. EIP has over a half billion dollars under management, making it one of the largest sources of private capital for ecological restoration projects in the world. Born and raised in Brewer, ME, Fred graduated from Yale University in 1973 where he played varsity football. After college, he began his career in finance with Citibank in New York City and left there in 1983 to become president of a regional bank in Tulsa, OK. In 1986, he co-founded Capital Resource Partners, a private equity investment firm located in Boston and retired in 2002 to focus on his projects and partnerships in Montana. A scholarship student himself, the time Fred spent on several Native American reservations, including Ft. Belknap in Montana, led him to endow a scholarship fund at Yale to support Native American students from reservations. A current Danforth scholar is from the Northern Cheyenne Reservation in Montana. Fred is survived by his wife, Carlene Larsson, and two sons, Trygg Larsson Danforth and Pierce Danforth Larsson. A celebration of Fred’s life will be held on April 9th at 5pm at the Boston Harbor Hotel in Boston, MA. The family requests that in lieu of flowers, donations be made to the Fred C. Danforth ’73 Scholarship Fund at Yale University or the Blackfoot Challenge, a non-profit focused on conserving and enhancing the natural resources in Montana’s Blackfoot Valley.

Chris Maxey shares, Fred was a true self made man who loved being a part of a team. You could always lean on Fred to give everything he had in all aspects of his life. We miss him tremendously. 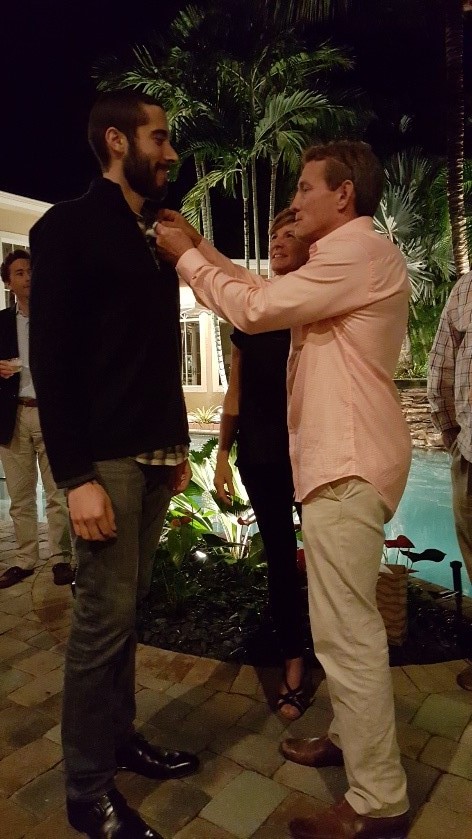 In January, the Board of Directors for The Island School gathered in West Palm Beach, Florida for one of their three annual meetings. The purpose of the gathering was to celebrate transitions and alumni energy as well as share ideas on the direction and focus of the school as we head into 2016. Alumnus Drew Fink (F’05) was pinned with the starfish as he was welcomed into the ranks of the Board during this, his first meeting. Alums have consistently shown strong leadership and passion for The Island School and its mission of Leadership Effecting Change by volunteering for the Board. Drew was welcomed by returning Island School alums on the Board: 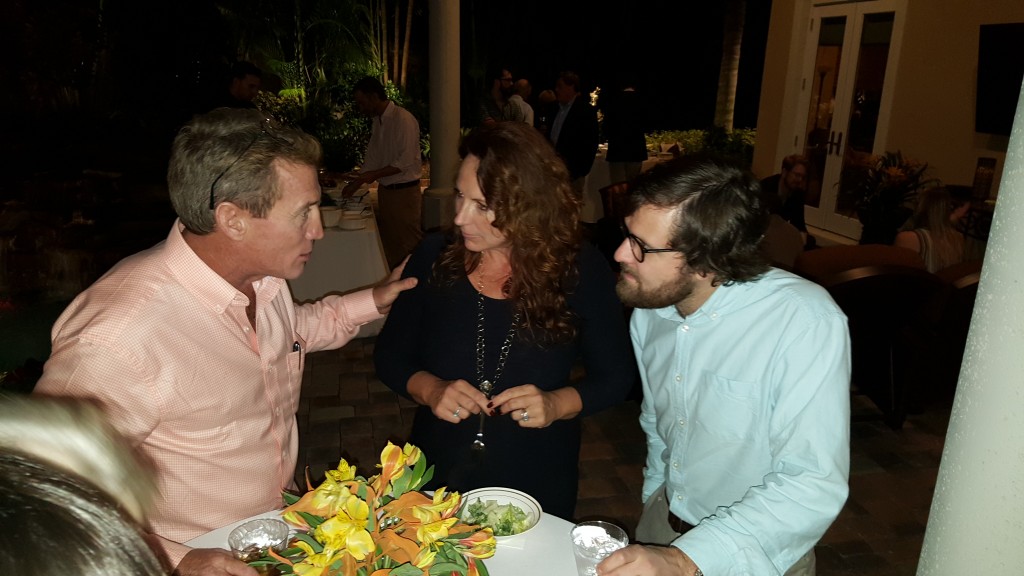 Do you want to be part of the The Island School’s Board and play a significant role in the vision, direction and execution of the future of the school? We are reaching out to all Island School, Cape Eleuthera Institute, and Deep Creek Middle School alumni who are at least two years removed from college and would like to submit an application to the nomination committee. If you would like to be considered, and you are passionate about what we do, please write to alumni@islandschool.org with a resume and cover letter describing your interest. The basic requirements for membership are as follows:

If you are interested, we can send you the Board’s handbook for you to learn more about what the expectations for a potential two year commitment entail. The two primary expectations that are held of all Board members are attendance of all three annual meetings (Boston, MA in October, Nassau, Bahamas in January and Eleuthera itself in April) at your own expense, and that The Island School is within your top 3 philanthropic commitments. If you have any questions or simply want to know more, please do not hesitate to reach out to alumni@islandschool.org and we will respond as soon as possible.

WE DID IT! The results for yesterdays giving day 1 for 100 are in and we are jumping for joy! Thanks to our amazing alumni and parent supporters, we far exceeded our goal of 100 gifts and received over 235 donations yesterday, raising more than $65,000, including the $25,000 gift from the anonymous donor!! 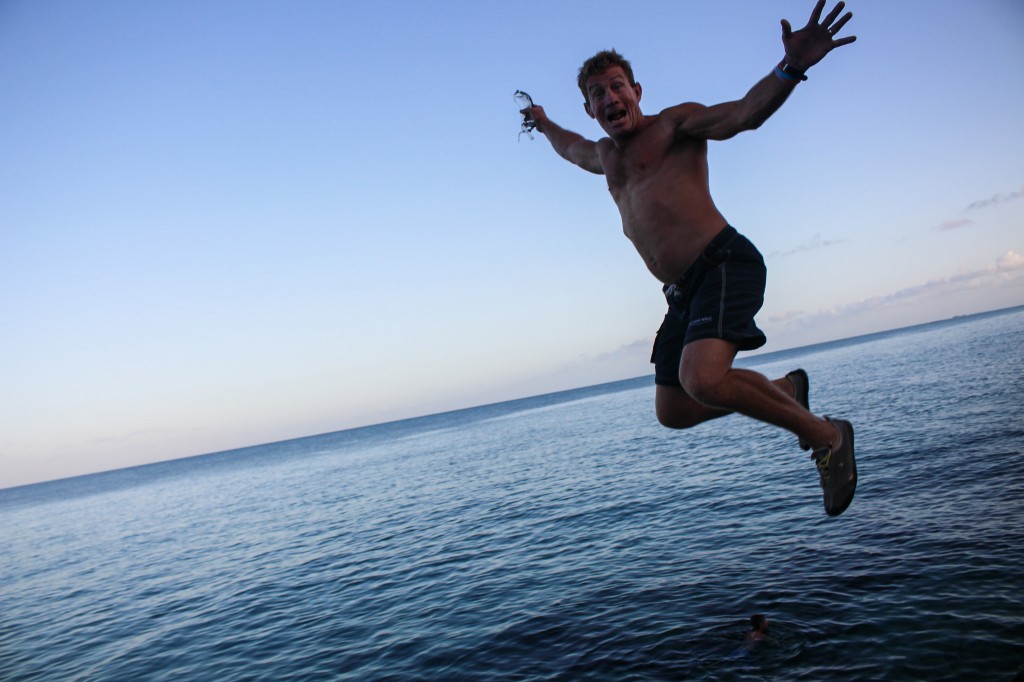 Today is The Island School’s Giving Day, 1 for 100: On 1 day, 1 gift can change 100 days for an Island School student. Our goal is to get 100 gifts of any size before the end of the day today. If we reach that goal, an anonymous donor has promised to donate an additional $25,000 to the Cape Eleuthera Annual Fund. To make a gift now, visit www.capeeleuthera.org/give. 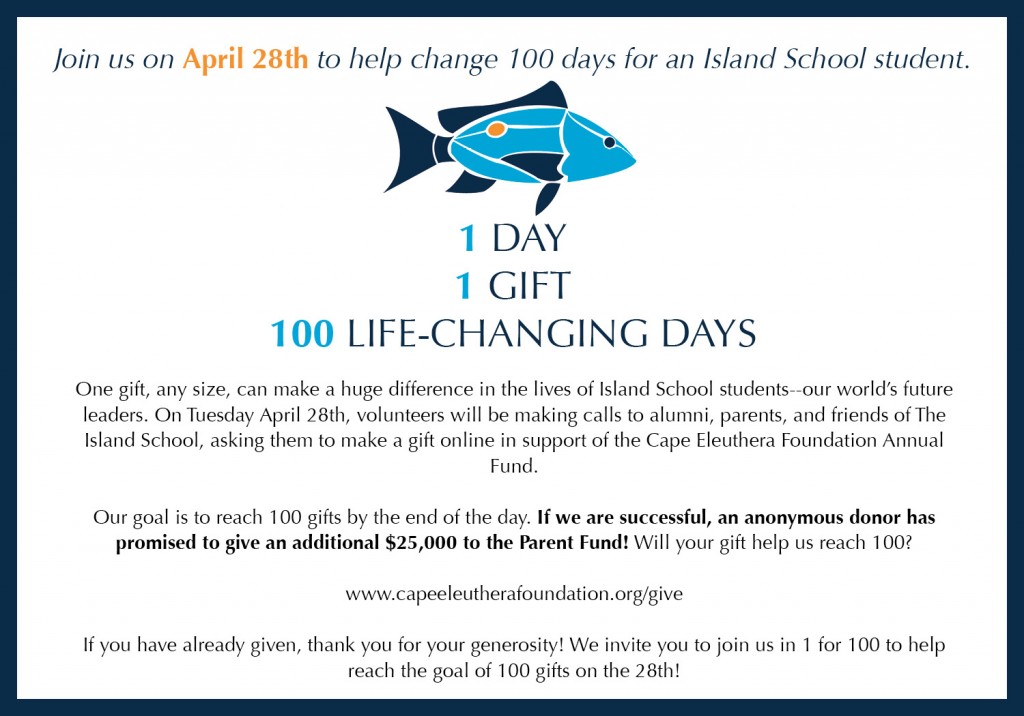