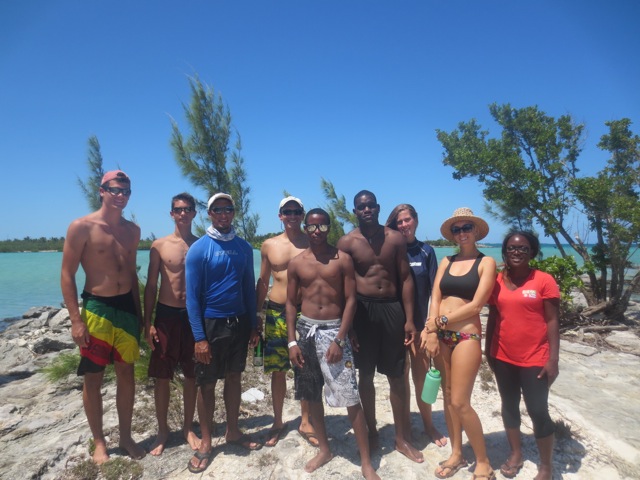 Last week Justin Lewis, from Grand Bahama, Zack Jud, from Florida International University and Tiffany Gray, from Cape Eleuthera Institute, worked with Cassandra Abraham at Friends of the Environment in Marsh Harbour, Abaco on a flats program with local students from Abaco. This flats program was like a shorter version, just 3 days, of our 7 day sleep over Flats Week summer program at Cape Eleuthera Institute. It gives students a chance to not only learn the basics of flyfishing, but also immerse themselves into the ecology and conservation of the flats ecosystem. We had 5 students, all Bahamians, participating in the course. 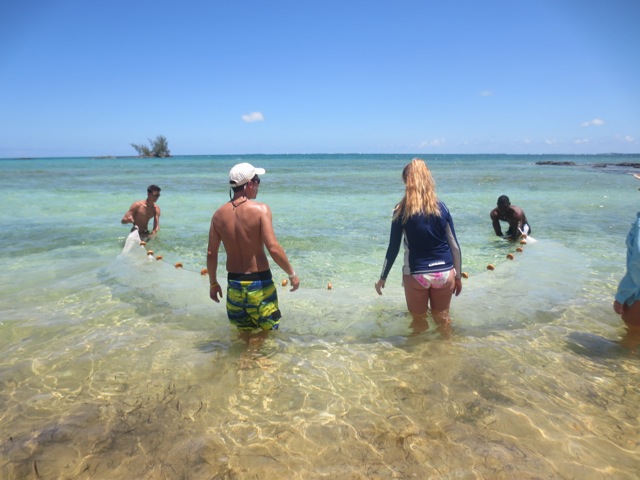 The program started out on Tuesday, August 13th, with an informational presentation on bonefish and flats ecology. Zach and Justin also spent a bit of time that first day teaching students the basics on flyfishing where they had the chance to practice casting, some of them for the first time! That afternoon we headed over to Great Cistern to do an introduction on methodology and how to use the seine net. We saw lots of turtles, a shark and caught some shad (mojarra), crabs, shrimp, and other fun stuff in the seine net.

The second day we tagged 20 bonefish around Crossing Rocks, about 12 miles south of the Marls. Clint Kemp from Black Fly Lodge in Schooner Bay took us out with two of their flats boats for a END_OF_DOCUMENT_TOKEN_TO_BE_REPLACED

Early Monday morning Shark & Flats week were off after a busy camp exploring the mangrove flats ecosystem in South Eleuthera.

The flats week students not only worked alongside our Flats researchers all through the week, but also had the opportunity to go bonefishing with some of the local fishermen of Rock Sound and Savannah Sound. In doing this, they got a taste of some of the local ideas in conservation of the mangrove flats ecosystem and protection of bonefish as well as other species that spend all or just part of their life there.

The Shark week students spent a good amount of time in the field setting longlines and drum lines for juvenile lemon sharks and their predators. They were very successful in tagging and recapture of juvenile lemons, having caught 7 in one day at a nearby creek. They were also able to use their findings to relate to other juvenile lemon shark studies from the Bimini Biological Field Station.

On the last day, both shark and flats presented to their fellow campers and END_OF_DOCUMENT_TOKEN_TO_BE_REPLACED

After graduating from Queen’s University with a Bachelor of Science Honours degree in Biology, Liane was offered a job at CEI working in the Flats Ecology and Conservation Program. She has since been given the opportunity to pursue her master’s in science through Carleton University, Canada at CEI. With the supervision of Dr. Steven Cooke (Carleton University, Fish Ecology and Conservation Physiology lab) and Dr. Cory Suski (University of Illinois, Ecological Physiology lab) Liane will be studying the thermal biology and spatial ecology of bonefish.

In addition to being part of a multi-million dollar catch-and-release fishery, bonefish (Albula vulpes) are an essential component of tropical marine ecosystems and an integral part of END_OF_DOCUMENT_TOKEN_TO_BE_REPLACED

This week, the CEO of Orvis, Perk Perkins, cruised through Cape Eleuthera. Perk is on a sabbatical from Orvis and is spending his time sailing throughout the Caribbean. He stopped by The Island School and Cape Eleuthera Institute to check out the work we are doing down here. He is most interested in CEI’s research on bonefish and the study of their flats habitat. We hope to stay in touch with Perk in the future so that he may help guide us as CEI becomes a hub for flats research in The Bahamas. The next stop on his tour of the Caribbean is the Exumas and CEI’s Aaron Shultz was lucky enough to accompany him on this leg of the trip. We hope Perk comes back to visit us again soon!

A couple weeks ago the Bonefish Flats group took a trip to Page Creek in order to gather information about the habitat that Bonefish live in.

The flat that we went to was surrounded by the ocean and land.  In the beginning of it the depth ranged from 0-3 feet, deeper into the flat it was only a foot deep.  Some fish populations included yellowtail snapper, schoolmaster fish.  There were also red mangroves all over.  Flats are generally shallow areas.  They are an abundance of mangroves and small fish that use the mangroves for protection.  Present in the mangroves are species such as small fish, echinoderms, Cassiopeia, etc.  In the flat that we went to the water varied from 0-3 feet.  The beginning of the flat was deepest, and then it got shallower.  In the flat we found yellow tail snapper, schoolmaster fish, blue crabs, etc.  There was sand and turtle grass on the floor.  When we went there it was low tide and the sun was high in the sky.  This caused for the water to be much warmer than if the sun was not out and it was high tide because the more water there is the more energy it takes to heat it up.  It was important for us to take a trip to the flat and observe it because this is the habitat for Bonefish.

We went into the flats to have hands on experience with our studies. We went into the field to collect, observe, and tag Bonefish to have a better idea of where we should take out studies. END_OF_DOCUMENT_TOKEN_TO_BE_REPLACED

So everyone has heard of climate change/global warming- increased anthropogenic CO2 in the Earth’s atmosphere shifts annual global climate, which then leads to other catastrophic events within the Earth’s ecosphere. An increase in oceanic temperature and acidity is among the most pressing and readily apparent effects of climate change. Past research has shown fish of tropical reefs to be particularly sensitive to changes in ocean temperature and pH. In the flats department, we aim to determine whether common teleost occupants of tropical mangroves exhibit a similar sensitivity to such changes. Using bonefish (Albula spp.), checkered puffers (Sphoeroides tetudineus), juvenile yellowfin mojarra (Gerres cinereus), and juvenile yellowtail snapper (Ocyurus chrysurus), we aim to determine the Critical maximum and minimum temperature and pH at which each species looses equilibrium (“goes belly up”). END_OF_DOCUMENT_TOKEN_TO_BE_REPLACED

The Fall 2011 Flats Research program kicked off their first class with Sam Saccomanno, Annie Blanc, Kate Maroni, Tori Suslovitch, Brendan McDonnell, Franklin Rodriguez, and our research advisors, Justin, Liane, and Ally. The focus of our research group is to study and raise awareness about mangrove conservation.
[slideshow]
What are flats and mangroves? Flats are the area between land and sea where there is a broad surface level but shallow depth. Flats can be shallower than just a few centimeters and as deep as 2 meters. Mangroves are a plant species that thrive in the flats ecosystem and are very important on both an ecological and economic level. They are important nursery grounds and breeding sites for birds, fish, crustaceans, shellfish, reptiles and mammals, are renewable source of wood, accumulation sites for sediment, contaminants, carbon and nutrients, and offer protection against coastal erosion. END_OF_DOCUMENT_TOKEN_TO_BE_REPLACED

Carter Houston Brown returned to Cape Eleuthera this summer to work as an intern in CEI’s flats program after graduating high school. He attended The Island School in Spring of 2009 and came back because he “really fell in love with this place.” Originally from Bryn Mawr, PA, Carter will be attending Hobart-William Smith College in Geneva, NY where he hopes to study environmental sciences this fall.

As a student at The Island School Carter’s research was archaeology , so this time back he was eager to do anything in the water, and the flats program sees that he gets his wish. Working alongside Justin and Luke, he spends much of his day walking the creeks catching and tagging bonefish. Although the days are long he doesn’t seem to mind the work, as long as it’s in the field. “Cubicles are scary” says Carter, adding “the idea of a desk job is just not appealing to me.”

This time around Carter has enjoyed seeing the other side of campus—the research side. He’s also impressed with the amount of building that has gone on here in the short time he’s been away from campus, with additions like the bike shed, the resource area, and the new construction at Hallig Hall.

Carter encourages alumni and friends and anyone else reading to do two things: jump at an opportunity to come back to the Cape, and SEND MAIL! Apparently mail can really make interns’ days, so if you’ve got something to say to Carter or any of the interns or alumni down here, why not write it down and put it in the mailbox.

Carter can be reached at:

The Flats Research team recently traveled by boat to Kemp’s Creek to catch bonefish. Our research group is studying bonefish, among other species, because there have been very few studies on them.  This is surprising, considering the important ecological role played by bonefish, as well as their appeal for sport fishing in the Bahamas. Bonefish are mainly found in shallow flats ecosystems, since this is where they hunt for prey. At low tide, however, bonefish tend to swim into open ocean. Recognizing that bonefish would be making this transition during the change in tides, we headed to Kemp Creek to collect some for our research.

The process by which we caught the bonefish was a method known as seining.  This method involves setting up a large net that covers the opening where the creek meets the ocean.  Many fish enter tidal creeks during high tide to forage for food.  We purposefully set the net during a time when the tide was leaving the creek, because the bonefish would be following the tide and retreating into deeper waters at this time. END_OF_DOCUMENT_TOKEN_TO_BE_REPLACED