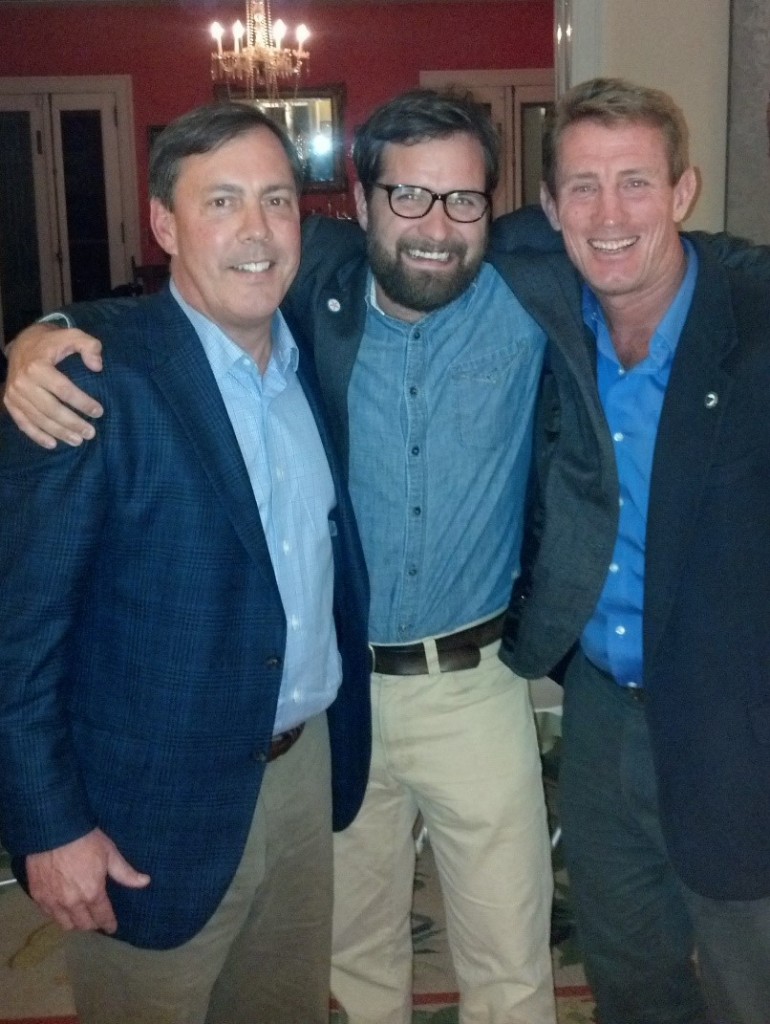 From left to right: David Green, Greg Henkes and Chris Maxey at a Board meeting in the Hamill residence

We recently had a chance to catch up with Greg Henkes, an alum from the Spring 2003 semester, from our office on campus. We asked to hear his story of how he came to be at The Island School as a student and where he has been since. Greg was one of the first students from Maine to attend the Island School and hails from the town of Yarmouth. He originally heard of The Island School while in a meeting with his Guidance Counselor at Yarmouth High School. The counselor recommended to Greg that he go see “this random guy give a talk about a semester program they had started in the Bahamas”. That “random guy” turned out to be our very own Christian Henry who obviously sold Greg on the idea of attending The Island School. As things would turn out, Greg explains, “Christian is my neighbor now. I live in Cambridge, Massachusetts with my wife, our daughter Charlie, and two dogs”. Greg is now a postdoctoral fellow at Harvard University in the Department of Earth and Planetary Science, and he studies “the physical and chemical evolution of our Earth’s oceans on geological timescales”. Student-driven research was and is a large component of the semester experience. Greg’s current work reflects what he was inspired to study as a student. In addition to his work at Harvard, Greg also holds a positon on the Board of Directors of the Island School where he works to constantly improve the school for future generations of students.

In a way, Greg and many other alumni never completely left The Island School after they boarded the plane home at the end of their term. Instead, they became driven to find meaningful and personal ways of giving back to the program that came to mean so much to them. For Greg he “made alumni giving a personal priority, but I wanted to go deeper than that”. With his well-earned Ph.D. in hand, Greg decided that he was in a unique position with his skillset to benefit The Island School, so he applied to and was subsequently accepted into the ranks of our Board of Directors. Since joining, he has leveraged his scientific and personal interests to further the development of  “the integrity and quality of research done by Island Schoolers and CEIS/CSD scientists and engineers, safety and student culture and attracting quality students.” As a scientist, Greg loves to learn, and being an active member of our board has afforded Greg the chance to continually learn as he interacts with his fellow members.

The Island School inevitably has different effects on everyone who attends the semester program. Greg looks back on his time at The Island School as a “period of tremendous growth.” He was transformed physically and mentally from a “crew cut high school hockey jock from Maine” to a “passionate young adult, albeit over-tanned and with shaggy hair, but also ready for college and the next adventure.” For Greg, the experience “laid down the framework for a career in the Earth sciences.” Greg’s new career goals were highlighted by the time he spent at The Island School compelling him “to be outdoors more often and having a sharpened intellectual curiosity.” When Greg attended Bates College, he found himself drawn towards studying Earth Sciences and attributes it to the fact that it is “hard to imagine SCUBA diving nearly every day or having math class on a boat not push someone towards studying the Earth.” While at Bates, Greg connected with future faculty member David Miller. They became good friends in college and even started a Student SCUBA Club at Bates. “We bought equipment and ran open water classes. It was a hoot! We did some really cold Maine dives together too!” When it came time for David to apply for a job at The Island School, Greg gave him the official “Henkes stamp of approval” with a recommendation to Chris Maxey. David spent three years teaching literature and SCUBA on The Island School campus and was the Dean of Students for a year. While at The Island School, David brought with him a metric ton of energy, a passion to change the lives of all of his students and the ability to make anyone laugh. All of this happened because Greg happened to meet David at Bates!

As an alum of the Spring 2003 semester, Greg has had the chance to watch the entire Cape Eleuthera Foundation and Island School grow and evolve for the past 13 years. He humbly states as “a notable addition” that “CEI was a twinkle in the eyes of Maxey, Christian Henry, the Danylchucks, etc. when I was a student, and now it’s a full blown, Caribbean-leading research institute with amazing programs studying a diversity of ecosystems”. He describes the physical changes to campus as “emblematic of the strategic and visionary decisions that have accumulated over the years. Those of us who’ve stayed connected and who’ve had the longest observational ‘datasets’ of the Island School know that the place is a living, evolving, institution.” Many alumni will agree, however, that there is a key part of The Island School that has not changed over the years, and that in fact may be more important than everything that has. This key part is the heart, the soul, the pervasive culture within the community that every student, researcher, and staff member is welcomed into with open arms. Greg states that the rock of The Island School is the “student experience. It’s my impression and belief that the whole place rotates around a core that is the student experience and its transformative impacts.” 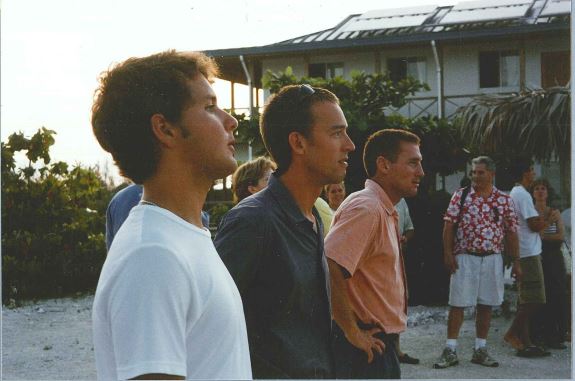 From forward to back: Greg, former Head of School Ben Freeman and Chris Maxey gather during Parents Weekend

When asked about his favorite memories from his semester, Greg replied with a thoughtful answer: he does not have one stand-out favorite memory but rather a favorite concept. All of his fondest memories were “of faculty or staff making the extra effort to include me in extracurricular things” and the “lifelong friendships” that they forged because of that extra effort. Some of the highlights that Greg mentioned included working with David Orgain and Jack Kenworthy on the “sand bag” building that now houses biodiesel operations. “I did this during my free time when I could’ve been off working on my suntan or watching a movie. I was asked to join Maxey, Andy Danylchuck, and Daniel Benetti to scout a location for the shark cage one evening after class. And I spent some real quality time hanging with the kitchen staff, Mooch, Becca, Tiff, Sheryl, getting to know them, Bahamian culture, and food traditions.” The result was that everyone in the community’s “openness and honesty (early on) to me as a student was probably not in their job description, but made a huge impact on me personally.”

Greg, thank you for all that you have done and continue to do for The Island School! We look forward to having you on island once again this April for the board meeting.