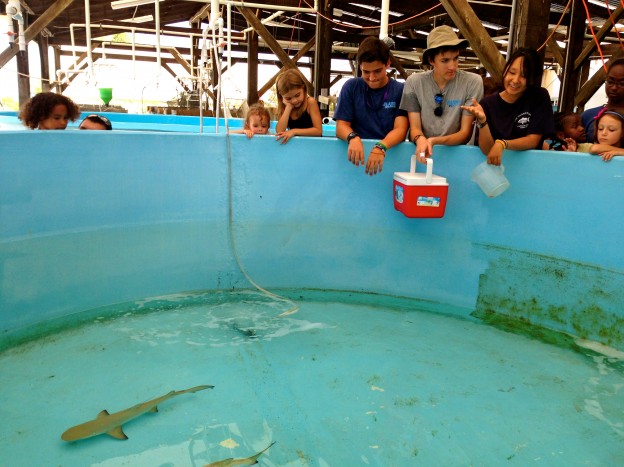 The Flats group has begun running our shuttlebox trials to determine how climate change will affect Bonefish, Yellowfin Mojarra, Schoolmaster Snapper, and Checkered Puffer Fish. For our experiment, we have a shuttlebox, which consists of two circular tanks that are connected by a short swim-through area. For our experiment we are heating one of these tanks and waiting until the fish ‘shuttles’ to the other side. We have run a number of trials on both the Snapper and Mojarra. In some of these trials, we place a Lemon Shark in the unheated tank to play the role of a predator. Unfortunately we haven’t had any excitement; there have been no fish fatalities.

We do other things besides just shuttlebox trials. One day we cleaned the tanks with the Early Learning Center. Andrew and Charlie worked with the kids to clean the Bonefish and Mojarra tanks. The little kids were either really excited or a little bit scared to clean the tanks. Some of them jumped right in the bonefish tank but a few hesitated. In the end, the kids had a good time and the tanks got a good scrubbing, a success on all fronts.

We’ve spent lots of time in the wet lab recently but the other day we went out fly-fishing. This was only half of the research crew; Dale, Andrew, Krissy, and Hayeon, because the rest were on kayak rotations. Dale was the only one of us who had any previous angling experience but Aaron gave the rest of us a quick crash course on fly-fishing. We learned how to cast and single haul. Unfortunately, we didn’t catch anything on this trip. Better luck next time!