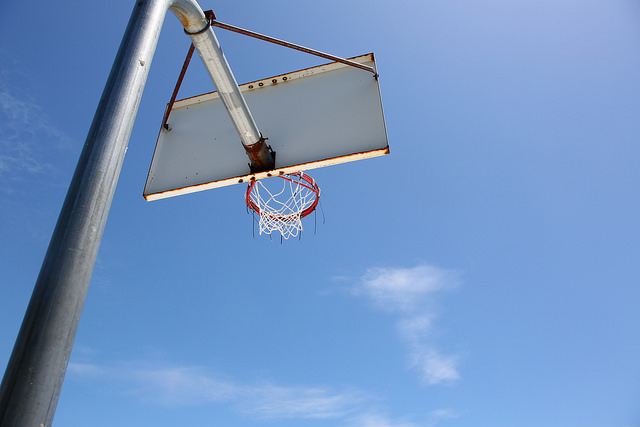 Last Sunday I had the opportunity to showcase my talents along with Island School kids and individuals from Deep Creek community. My friends Triston, Gus, Jeremy, Ian, Khalil and I traveled to Deep Creek along with Pat as our overseer. After arriving we shot around the court for a little while then played a warm in game to twenty-one before we picked teams ans played 4-4 basketball. In the first game the team was Pat, Ian, Michael and I against Gus, Triston, Khalil, and Jeremy. My team and I started the game out playing good basketball and we developed a good chemistry moving forward. We jumped out ahead with a big lead and then starting playing lazy which resulting in the opposing team gaining some points. However, we closed them out pretty easy once we decided play time was over.

The sun smiled its rays down on us as sweat gently dripped from our exhausted bodies. The next team to step on the court was a challenge, but I love challenges because they give you and opportunity to become better and make others better in the process. We were up against Darrel, Rachael, Cammy, and Brendan. “Screech, screech” was the sound our exotic shoes made sliding across the rouch cemented court. The game began with Darrel’s team jumping out ahead taking advantage of mismatches and leaks that they saw in our team. It was to my surprise that Rachael could play so well, she completely took advantage of my comrade Ian as Darrel bullied Michael in the post. It was time for me to stop taking a back seat, I demanding the ball and went to work scoring multiple baskets in a row. An intense game went on and no team would break first with the scored being tied 20-20 in the long run. It was our ball and the moment was bright what will I do, pass to my partners or take it the hoop and do what I do best score? I crossed over Brendan and drove to the rim as a diversion knowing in my mind that Darrel would switch over to help because he had a point to prove that he was this superstar player and wanted to advertise it to the world. Knowing that I could still try and make the shot I gave it it to an open teamate for the shot in which they missed resulting in the opposing team grabbing the rebound and claiming possession of the ball. I played defence to the best of my ability and in the corner of my eye I could see Darrel posting up Michael and asking for the ball while he was in the post up position. The thought in the back of my head flickered that Darrel would score if he got the ball and if I left Rachel to help on defence she would automatically receive the ball and it was a high percentage she would hit the shot. Therefore, I decided to stay on my opponent desperately hoping Michael would protect our basket in which he was unsuccessful in doing and resulting in our defeat. We lost that game 20-22 and yeah it was heartbreaking but I am a great competitor and use experiences to make me a better person and basketball player in life. I shook hands with everyone and exclaimed good game for I knew I would have a next opportunity in the near future to showcase my talents and this time I’ll lead my team to victory.