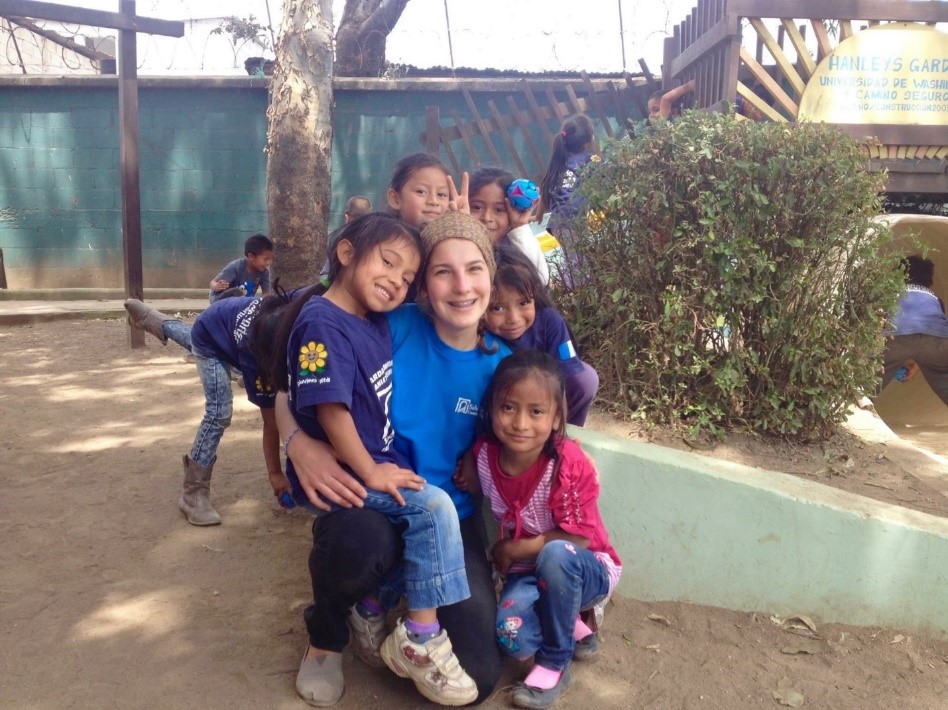 As an alum from the most recently completed Island School semester, Fall 2015, Ginny Laurita has already begun to make her mark in the wider world through service. For Ginny and others from her semester, the transition home is in many ways still ongoing. For many, the solution to transitioning back home is to keep busy. This is what Ginny has done and is continuing to do. When Ginny returned home, she “got my license, and threw myself into a school club I joined last year called Interact. Interact is the high school level of the Rotary Club, in which we do community service projects in the community. I began going to meetings, and volunteering for as many events I could participate in as possible.” In February, Ginny began to contemplate her future beyond high school. She “went on a college trip with my friend where we visited six different schools. The process of starting to look at colleges is exciting but also nerve wracking. Lately I have been going back and forth on the idea of doing a gap year. If I were to do one, I know that I would like to go with a purpose.” To fit her goal of working with a purpose, Ginny discovered an opportunity to go to Guatemala with her Interact group to work in Guatemala City for 10 days with a group called Safe Passage.

From the moment that Ginny discovered this opportunity with her club, she was hooked. She knew she had to go. Of course, there was a catch: “When I got back from Island School, the trip to Safe Passage was actually full. The sign up process had already happened, and the group had already begun to fundraise for their trip.” This meant that technically, Ginny was closed out from the opportunity for the year. However, after expressing her interest and dedication to the supervisor and other students on the trip, the group managed to open up a spot for her and she was set to go! The trip really resonated with Ginny because “after living on Eleuthera, I was able to experience the difference that education can bring to a place of poverty, and is part of the reason that going to Guatemala and participating in the efforts of Safe Passage spoke to me so strongly.” Safe Passage, the organization that Ginny’s Interact group would be working with, is located directly near the “Guatemala City dump, which is the largest dump in the area. A huge quarry that is filled with mounds and mounds of garbage, is the source of work for many Guatemalans. This dump used to also be where many lived, and found food, and clothes, until the law was put in place that no one was allowed in the dump during the night.” Naturally, the conditions of such a place are hazardous and unhealthy. Safe Passage serves to provide education, a safe place, and better opportunities for children and families who had formerly worked in the dump.

While working at Safe Passage, the main goal for Ginny’s Interact group was to be integrated into the daily routine. A lot of time was spent in their “English classes, helping the teachers with activities and games as they learned their numbers, colors, and basic phrases. We worked with children in grades 2 and 3, as well as in middle school.” Ginny was blown away by the “excitement in each child to learn, as well as the energy from each teacher as they made every activity fun and enjoyable for the children. When we came to the school for the first time, and then every time after that, we were all immediately welcomed with hugs, smiles, and laughter. When we would spend recess with them, the amount of energy that each of those tiny children had was both refreshing and exhausting. It was so incredible to see the joy on the faces of these children who have been through so much in their lives.” Ginny firmly believes that she and the other members of the trip had a mutual exchange of knowledge with the children they were working with and that she was absolutely “amazed by was the amount of resilience (Editor’s note: Italics in original)that each of these children had.” The Interact club brought a project of their own which was to make puppets and decorate them with the children. The puppets were well received and Ginny was happy to see that “the kids all loved them, and it brought us all so much joy to be able to bring this light into their lives that have so much dark.”

In addition to working with the children, Safe Passage also works with the adults in the community.  The program is called Creamos (creation) and culminates with the adults receiving a high school diploma. They are taught how to do accounting and learn English. One program for the mothers in particular, focuses on teaching them accounting alongside making jewelry that then goes into a store that these women are taught how to run. It was clear to Ginny how “hard working they all are, and how much they care for their families. These mothers were able to go to school, for the first time for some, and get an education that will open up a whole world of opportunities for both themselves and their children.” For all the good that Ginny and her Interact group were doing, they could not possibly help everyone who was living near that dump in Guatemala City. This was overwhelming at times because they were aware of the scale of help that was truly needed to benefit everyone, but, Ginny was greatly impressed by the resiliency demonstrated by everyone that she met in the city and thinks that, of all the people she met there, that they are “some of the strongest, most kind-hearted people I have ever met, and I believe that having the chance to meet them, and experience their lives, widened my worldview in a way I am still realizing even now.”

Looking ahead to the future, Ginny has quite a few plans and aspirations in mind. She has begun to tour colleges on the East Coast and plans to continue doing just that so she can get her bearings when it comes to what she wants in a school. She is thinking of doing a gap year and using that process to travel and get to know herself better. As a direct result of her travels to Guatemala, she has begun the process of partially sponsoring a child named Cristina in order to continue her connection with the program. Ginny has been bitten by the travel bug this year with her time at The Island School and in Guatemala and is looking forward to many more adventures in the future.

In closing, Ginny had a series of shout outs and thank yous that she wanted to send out to everyone:

I would like to thank everyone at The Island School who I met, and who made those the best 100 days of my life. I truly believe that each and every one there made my experience what it was, and I cannot thank The Island School enough for creating such a magical, challenging, environment where students can come to learn and thrive in the most amazing and supportive place. I’d especially like to make a shout out to S4 for one of my favorite experiences at The Island School, I think our group, and memories on that trip are ones I will remember my whole life. Also girl’s dorm, for being so supportive when I was going through all the medical challenges I faced, and for becoming a family that we will all have forever. I’d like to thank my advisory, for awesome advisory outings, and a big shout out to Kat for getting me through the challenges I faced over those 100 days. I want to thank everyone who makes The Island School possible, and for giving me and all other students an experience to try new things, to meet new people that both have pushed and excited me for what might come next.

Ginny, from all of us at The Island School, we wish you the best of luck and hope that one day your adventures might lead you back on our campus!