As the we eagerly set up stations in the dining hall, the sounds emanating from the 44 other students stationed around the flag increased. About an hour earlier, the 4 other caciques and I posted the 11 teams and declared that extra points would be given to the teams with the most spirit, creativity, and, of course, the best costumes. In the final moments before the official Saturday Night Activity began, the 4 other Caciques and I went out to the flag pole, triumphantly observing all of our peers dressed up in extravagant costumes ranging from wetsuits to cowgirls to USA-themed and even to people dressed up as other members of their team. 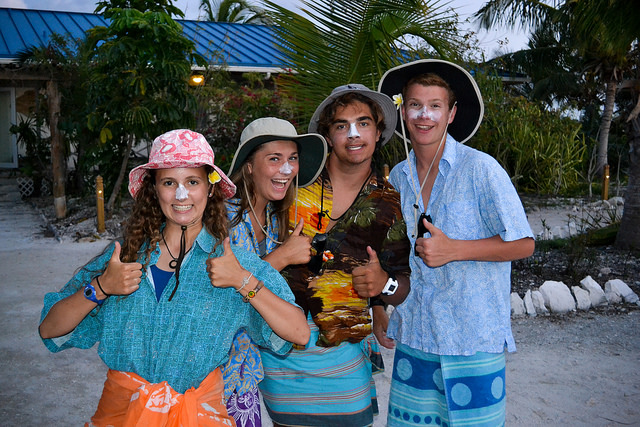 Last Saturday’s evening activity was The Olympics. Essentially, there were various stations and competitions set up around the dining hall that each team competed in. There were prizes awarded to the every team, but the team with the most points got to choose which prize they wanted, as there was a wide range of awards from a dawn dive with hot chocolate or lunch with Maxey to a day with endless ice or a high-five workshop with Tom.

The evening started with a short briefing in the prez room and then the students were set loose to come up with a jingle/cheer/performance of sorts to represent their team. These were then presented and points were awarded for the best one—a team decked out in safari hats and PFGs took the win for this category with a hilarious dance/skit about Steve Irwin. Following these performances, each team chose a representative to complete the first challenge: thawing a thoroughly frozen t-shirt, untying the numerous knots, and finally putting this t-shirt on. I was later informed that teachers all the way at CEI were able to hear the excited cheers from the dining hall, showing how enthusiastic everyone was! As the night went on, teams traveled from a plank contest—where the Island School plank record was set by Charlie Widing—to apple bobbing, to “mystery cup,” and a few others.

The evening ended with birthday cake for Baker Casagrande’s 17th birthday and an announcement of the winners. It was an incredibly energetic, action-packed night that students and teachers alike enjoyed.