What do aquaponics and type-2 diabetes research have in common? Curiously enough it turns out that The Island School is the common link! Christopher Teufel attended The Island School in the Fall 2013 semester after learning of the program from Bart (F’04) and Jake Cerf (F’05) who lived nearby in Chris’s neighborhood. Chris was close to Bart and Jake because they were “the only male babysitters I had and also the only people who would have pillow fights with me and let me stay up and eat ice cream on a school night.” When Chris entered high school it was the mother of Bart and Jake, Beppy, who dropped a hint to Chris’s parents reminding them of the program. It certainly helped in Chris’s case that “all my life I had been interested in marine science and the environment.” From there, the rest is history. Chris applied and attended The Island School saying that “my semester at IS did more for me than I could have ever imagined. I not only became more confident with my interpersonal relationships but also realized that I really am interested in scientific research and that this career path could very likely be the one for me.” Speaking of scientific research, Chris is currently pursuing two projects. One is a homegrown aquaponics study on cichlid fish conducted in Chris’s basement and the other is type-2 diabetes research at Jackson Laboratories (JAX) in Bar Harbor, Maine.

It is fairly unusual to hear of modern day mad scientists conducting half-baked experiments around smoking beakers in their own homes. Fortunately, Chris is not counted among that number, although his parents may have initially disagreed. Christ learned all about aquaculture and aquaponics during his time at The Island School but did not develop that interest until he returned home and “happened to be doing a lab in my AP biology class at the time that examined animal behavior and so as a result I decided why not conduct some research of my own.” Chris’s parents “were certainly a little hesitant at first and more than a few times inquired why the fish tanks had to be kept at our house and not the school or really anywhere else” but eventually, they became used to the new normal of having the basement re-purposed as a combination aquarium and laboratory and allowed Chris to work. Chris credits his research project with Sustainable Fisheries and Conservation for inspiring him to work in the field and demonstrating what “sustainable systems, such as aquaponics, could do for the future of Earth’s ocean ecosystems.”

When Chris first entered high school, he retained his interest in all things environmental but broadened that interest further to include biology. The result was the discovery that Chris was interested in medicine, specifically research revolving around genetics. Last summer, Chris received an “email from one of the STEM coordinators at my school regarding the opportunity to participate in a class outside of school conducting graduate level research in conjunction with Jackson Labs and three other schools around the nation.” These other schools were: Maine School of Science and Mathematics, North Carolina School of Science and Mathematics, and Rockdale Magnet School for Science and Technology. Chris jumped in with two other students from his school and “began this class with minimal programming technology and a relatively limited knowledge of computational genomics. Needless to say the learning curve was steep and we have certainly struggled but in the past month or two are definitely proud of the results we obtained and the knowledge gained from this experience.” This type of research never truly ends so if Chris’s interest continues, he could have all the experience he ever wants in this field.

Chris has, despite the relative differences between his two fields of study, been finding common ground between the two. His research on fish focuses on reactions to external environmental stimuli and his diabetes research involves the effects of genetic predispositions. In other words, his two projects create the classic nature vs. nurture debate that many scientists worldwide are studying. In the future, Chris is interested in examining the dispute of nature vs. nurture “in a variety of biological situations from levels of aggression in fish to a diabetic precursor in humans.” Chris hopes to return to his work at JAX in the future to further the study but has to put his work with cichlid fish on hold for his undergraduate years.  He is, however, open to the possibility of more aquaculture research in the future. 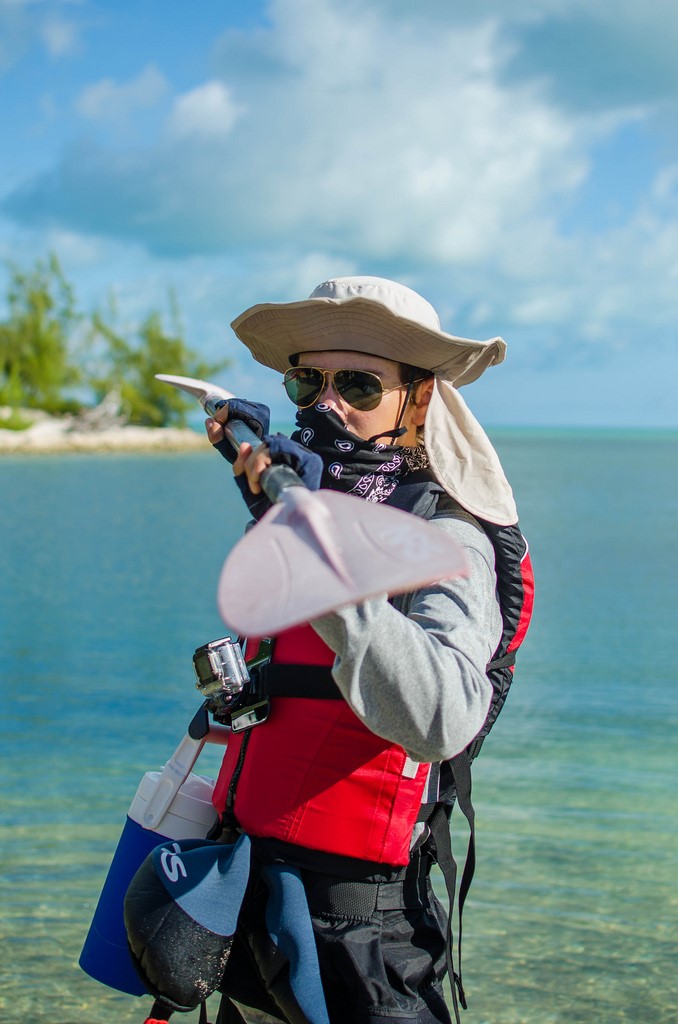 When asked if he wanted to give any shout-outs to people who influenced his time at The Island School, Chris had quite a few:

“This is a tough one. I would definitely like to give shout outs to Emma, my advisor and histories teacher who I was recently informed will be departing Island School soon, Peter Z for fanning the flames of my interest in marine ecology, John Schatz for being my running buddy and making sure we stayed relatively well-behaved, Catherine Klem for being a great math teacher and phenomenal kayak trip leader (let me know if you’re up at Sugarloaf anytime soon!) Ron and Karen Knight for your friendship and guidance throughout my semester, Will Strathmann for furthering my photographic knowledge and saving my camera gear on that fateful first day of our kayak trip, and the many other characters who contributed to my phenomenal experience. Of course, shout out to Fall 2013 for being some of the greatest friends I’ve ever encountered.

Best of luck to you, Chris, with your next steps in college and beyond! All of us at The Island School look forward to hearing more from you in the future.