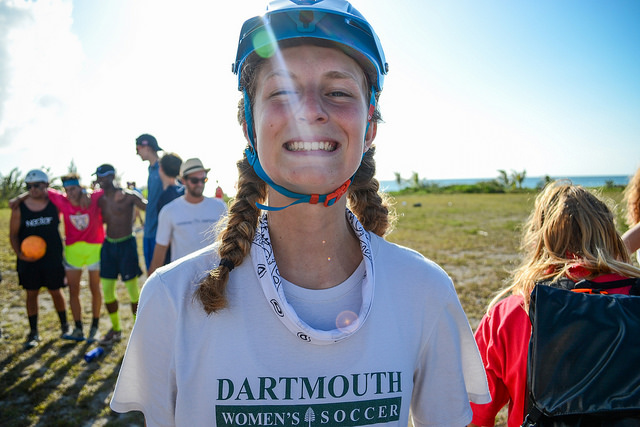 It’s seven in the morning and I’m laying in a hammock on the deck of girls dorm writing this blog and listening to Jack Johnson. I’m not wearing my glasses or contacts so I cant really see what I’m writing but hey—I like to live on the edge. That’s why I’m here, right? When I came here I had no idea how much of a challenge it would be in ways that I didn’t even imagine. I thought that jumping off cliffs and waking up early to exercise were going to be what pushed me. In fact it has not been those things, however six thirty run track is nothing to be scoffed at.

What really pushes me here is the combination of everything. I didn’t think I was coming to circus camp but I’m certainly learning how to juggle. It’s the five-hour research blocks, coupled with hour-and-a-half long classes. It’s getting up early and staying up late (ten thirty now feels like staying up late.) It’s being constantly around people and always on the go. However, this exhaustion is rewarding in its way. When I go to bed at night I am constantly amazed about everything that I have accomplished during the day. And when I wake up I find myself surprised that I have energy in the morning, yet everyday I wake up excited to face the next challenge, and there have been quite a few in the short month that we’ve been here.

During our ten-day orientation we had three days of SCUBA diving and three days of kayak. SCUBA diving was what challenged me the most between those two. I absolutely hated SCUBA diving at first, it seemed preposterous and stupid and ridiculous to try to breathe under water and my SCUBA diving instructor is determined to adapt and become a fish (Hi Pat!). Anyway, it was something that I feared and absolutely did not want to do twice a day. But that was what I signed up for so I did it twice a day for three days. I was particularly struggling with one of the drills that we had to do in order to get certified. Doing this drill involved taking my mask off underwater and then putting it back on. Every single time I took my mask off I would freak out and demand to go to the surface. However, on my last dive during the three day period, I was able to take my mask off, put it back on, and clear it. I felt an absolute rush of success. The dive that we did after was the most fun dive I’ve done so far—it was so beautiful and we took fins off and jumped around and I felt like I was flying. Something I feared turned into something that I loved.

Right after SCUBA came kayak. I loved kayak because I have been kayaking my whole life and was no afraid of it. I had never ocean kayaked before and we faced some nasty waves and currents. There were a few times when I would see a wave approach me and think: well, this is it. Those waves never ended up being the end, but it was nice when we were on calmer waters. Kayak was a beautiful experience. The water is so clear and blue and this island is a magnificent sight to see. Having a campfire under the stars on the beach surrounded by weirdos that become your best friends is one of the best things ever.

Now we’re in academic weeks that go by in the blink of an eye. Everyday is a new challenge, a new piece of homework I don’t think I have time to do, another long run on a hot morning. Yet everyday I am able to overcome those challenges, I do the things that I never thought I would be able to do and that is the beauty of The Island School, you discover that you can do so much more than you ever thought you could.